Decidedly “Lekker” Brandy/Cognac flavoured biltong. If you want world peace – this is the stuff you want.

“Ho ho ho!”
No, it’s not Hugh Heffner calling his three little maidens. It is Christmas in August, for I bring you glad tidings of great joy. The flavoured biltong recipes are ready for consumption. [By the way, you can read the The original biltong recipe here].

Both of my readers (yes, I got another one recently – and our sympathies go to their families, of course) have been really patient while I do my research and recipe testing. And on that subject, there appears to be a large contingent of biltong makers who feel that their recipes ought to be kept v.e.r.y secret. In the past months, I’ve visited several biltong makers throughout the Eastern, Northern and Western Cape provinces, and nearly all of them give the stock standard response, “Nah boet, I just use the normal spices hey.” It seemed as if nothing short of a stint in Guantanamo and a healthy disregard for the Geneva Convention would separate them from their biltong making secrets.

Well I haven’t taken this lying down. I didn’t even take it kneeling – except for on unfortunate incident with a very large farmer who took it up the wrong way, and the ensuing conversation required a hot extraction by Mrs Chips (I’m just getting myself deeper into this aren’t I?). No but seriously, the chaps have not been readily forthcoming with their ‘winning’ recipes, so I’ve done quite a lot of experimenting (no, not with the burly farmer – quiet you, in the back!). So, in the spirit of the internet and ubiquitous information here is what shall henceforth be known as:

Today’s recipe is a Brandy flavoured (Cognac, if you’re feeling flush) biltong. It is an adaptation of the original recipe by adjusting the spices and adding a little cognac. In so doing, a most pleasing layer of flavour was subtly added.

For you who are in countries other than South Africa, where Saltpetre, or Potassium Nitrate, is outlawed (we will leave the manufacture of explosive snacks to other, more radical peoples – here we just eat the stuff), you will be relieved to know that these recipes contain NO Saltpetre.

You will also be pleased to note that, unlike the original recipe for 25kgs of meat, the following quantities were used for a mere 1.8kg to 2kg of Silverside

Before we start, dear Reader, just a word of caution on flavouring. Flavour is about as subjective as a work of art; a flavour that appeals to one, might not be too lekker [Afrikaans: delicious] to another. So be prepared to do some experimentation, adjusting the levels of spices to suit your palette.

Also, with when making a cognac-flavoured biltong, subtlety must be our watchword. Adding too much cognac or brandy (as enjoyable as a “Brannas en Coke” – a beverage I am told is favoured among certain echelons of society) has all the subtlety of a leopard skin speedo….Not an image upon which one need linger… Right, on with your biltong.

NOTES
Roasting and grinding.
Preferably, roast and grind the three spices separately. In this way you will get an idea whether you want to add the Caraway or Juniper seeds and te respective quantities.

Coriander. It is entirely permissible to use the ground Coriander bought from the supermarket. However, since you’re going to all the trouble of making your own biltong, why not make sure it tastes that bit better.

If you buy the Coriander in seed form, lob the required quantity into a dry pan over a medium heat. Watch it like a hawk and as soon as they start to turn brown (or give off the first hint of smoke), whip them off the heat and into the mortar and pestle for a good grinding. Try and do this on the day you’re making the biltong as the added intensity of the freshly ground seeds really enhances the flavour of the biltong and makes the kitchen smell all Jamie Oliver-ish – i.e. professional.

Same goes for the Caraway and Juniper seeds.
With the Caraway, don’t heat them too much because you’ll get a bitter aftertaste. Take care with the quantity too, because Caraway has a strong flavour and if you put too much into the spice mix, you’ll overpower the other flavours. So add the Caraway pinch by pinch.

I found that adding 4 or 5 Juniper berries (also roasted and ground) complimented the Cognac pleasingly.

Vinegar Mix
The vinegar mix I used was a follows:

The biltong will taste quite satisfactory with just the plain old Brown Malt Vinegar; and you may well prefer it that way. I simply added the others for the ‘gourmet’ flavouring.

Best of luck with your attempt. I really hope it goes well and that you enjoy the end product. Let me know how you go. 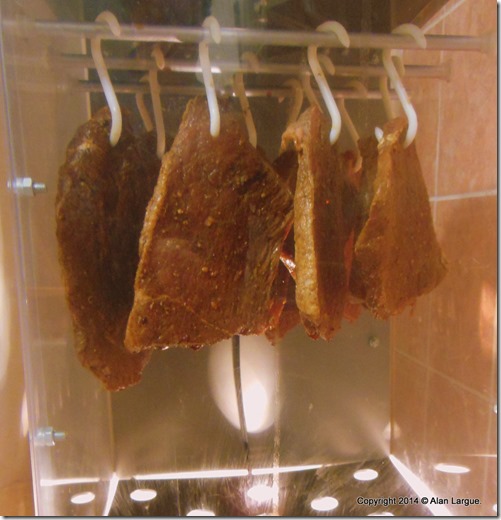 The Silverside starting its drying process. No, you can’t have any now!!!

Despite the banality of the name, FFC has led an intensely varied life. Grateful for surviving almost three years as a 'troepie' (soldier for non-South African Readers) in the Angolan war, he determined to wring as much out of life as possible. Currently providing Business Analysis services, trading on the stock market and developing web pages to pay the bills, FFC also dabbles in wildlife, landscape and people photography, writing, and far too many interests for his own good. He has also travelled extensively in southern Africa (working on the sound theory that a moving target is more dificult to hit). These peregrinations also include over 1500kms on foot through some of the worlds most spectacular scenery. It hasn't all been plain sailing, beer and skittles, and endless beds of roses... Chief amongst the prerequisites for surviving Africa, with its mind-bending characteristics, is an appropriate sense of humour.... So, for now, he will be recounting the amusing among the annoying, the frustrating wrapped in the funny and extracting the mirth from the melancholy... Oh yes, there might be some alliteration too.
View all posts by Freud Fission Chips →
This entry was posted in Humour - or humor, Recipes and tagged Biltong, Brandy-flavoured, Cognac, Cognac-flavored biltong, easy recipes, Epicurean, food, game, how to, Nutrition, photo recipe, Recipe, Recipes, snack, South Africa, South Africa 2014, South Africa SA, Spicy. Bookmark the permalink.