In the manner of the better photographers everywhere (well, we can fantasise can’t we?) we were up before sunrise and, with an oats breakfast bar removing all traces of moisture from our mouths, we drove off into the park looking for picture potential of animals and birdies doin’ a what comes naturally. 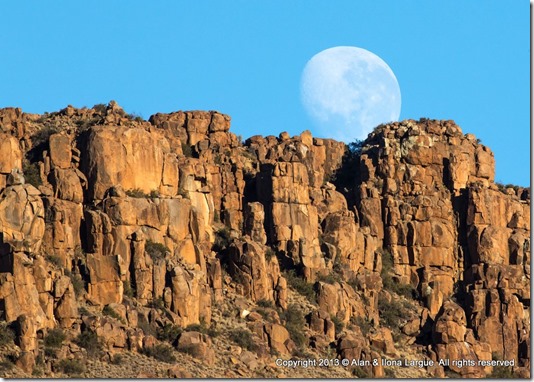 On the way, we saw the moon going off night-shift and made a pleasing pic of it rolling down a hill. There was plenty of game to see as they moved towards the sunny areas,or stood grazing in a warmish east-facing kloof [cleft]. On the still chilly vlaktes (plains), the usual suspects were observed hanging around; Gemsbok (Oryx), Springbuck, Kudu, Hartbees and Zebra. 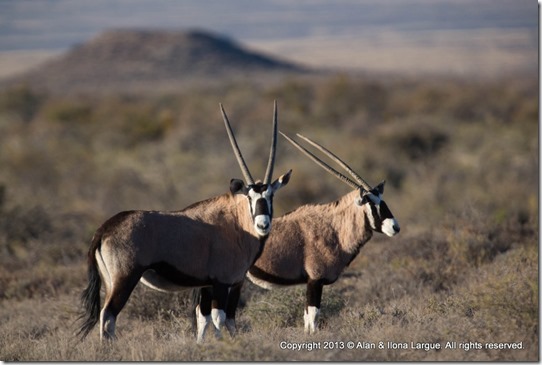 Oryx or Gemsbok in their thicker winter coats. 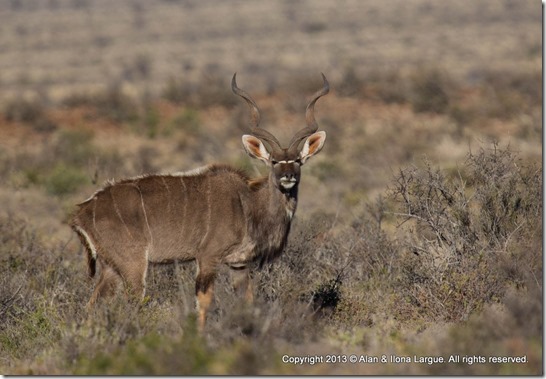 A curious Kudu bull watching us watch him, while he warms up and watches for lions

However, because of the good rains in the preceding months and many more waterholes, the animals were able to keep a sizeable distance from the road, making photography a bit of a challenge. Conspicuous by their absence were the normally abundant Impala (Rooibok) and Eland – which abound in other areas of this region of the Eastern Cape Karoo.

At about 09:30am we decided to break for brunch and found a fenced-off picnic spot. The picnic areas now need to be enclosed with stout electric fencing due to the presence of the newly acquired lions. No sense in getting eaten while you’re eating, and a little too close for comfort to Claudius asking Hamlet of Polonius’ whereabouts [Act IV, scene III – “Not where he eats, but where he is eaten”….and so on]. The electricity for the fence is supplied by solar panels, batteries and step-up transformers….and I can’t think of a snappy quote by Shakespeare to make that sentence more interesting.

The picnic spot was in a most agreeably tranquil wooded area, and with the temperature climbing slowly, we were able to remove a layer of clothing and bask in warm patches of mild winter sun. Sitting in quiet reflection, masticating on left over braai [barbequed supper] and fruit, we were treated to a number of birds coming out of hiding to join us at table, and we managed to get some decent pics before getting back on the road. 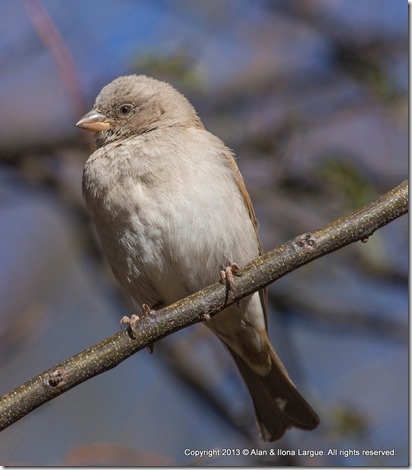 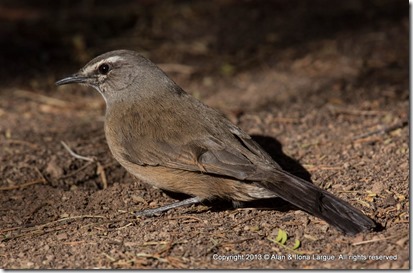 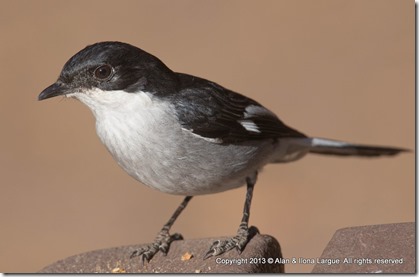 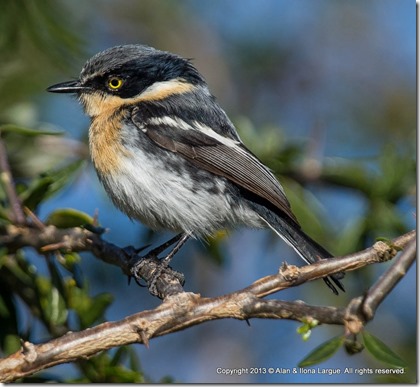 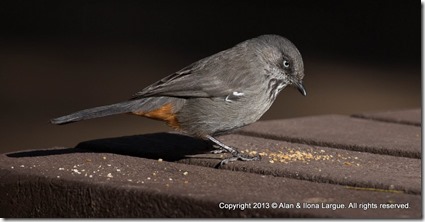 We climbed gently along the contours up into the Nuweveld Mountains which dominate the Karoo National Park. It has to be said that the roads (not the 4×4 tracks, obviously) are in excellent condition and can be negotiated with ease by normal sedans. In places where the roads were steep (necessitating a first gear climb), the surface has been either tarred or cemented. This makes for easier driving and reduces soil erosion in the rainy season.

Along the high ridges, a nippy breeze swept through the brush, reminding animals and humans that, although it was a sunny day, winter had not completely departed. In the thick scrub, we came across a congress of baboons hunkering down out of the wind. Even the normally playful young baboons were hastening to find shelter in the sunny lee of rocky outcrops. 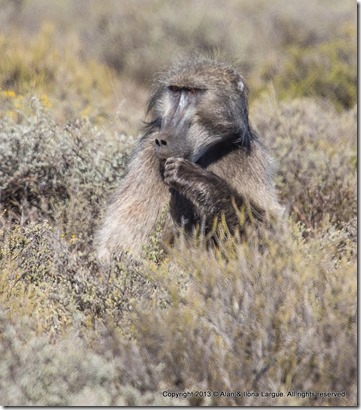 One of the baboons foraging in the Karoo scrub.

Cresting the mountains at a place called Rooivalle [Red Falls] we stopped and gazed in wonder as the vast and seemingly endless plain unfolded towards the horizon. While we were stopped, a pair of normally very shy Klipspringers (Oreotragus oreotragus) emerged and began browsing a short way off. We stayed still for about half an hour and revelled in the privilege of watching them just be themselves, oblivious of our presence. That also indicates how pleasantly quiet the Park is – no other vehicle appeared for at least a half an hour. 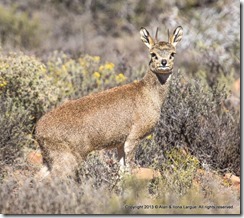 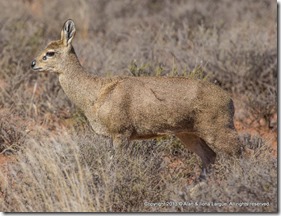 Alert readers will notice a dark spot on either side of their face, just in front of and below each eye. If you already know what this is, take a chocolate out of the jar and skip to the next paragraph. For the rest of us, this ‘spot’ is a pre-orbital exocrine gland. Most of our ungulates have them and they secrete pheromones and other chemical compounds believed to be used in communication (marking territory, sexual maturity, dominance and so on). Studies have also revealed that the secretions also contain antimicrobial compounds – either manufactured by the animal or by microorganisms living within the gland. These compounds assist in the protection against skin pathogens.

It was the vehicle of one of the honorary game rangers that ended our observation. A senior lady, a resident of nearby Beaufort West came to check on the nearby pairs of Vereaux Eagle (sometimes called the Black Eagle) which have nests among the crags. No matter how hard we scanned the cliffs and clefts, neither we nor the ranger could see them, and it was with some disappointment that we made our way – sans photograph – back to the camp via the appropriately named Klipspringer Pass. While this pass is not as dramatic as perhaps the Sani Pass, it does descend (or ascend – depending on which way you’re travelling) over 500metres (1 500feet, or 21 738 big toes).

The Klipspringer pass – descending into a vast Karoo valley

When the National Parks Board bought up the farms to create the park, they broke down all the stone-walled cattle kraals [corral or enclosure] and used the rocks to help build the pass. The construction of this impressive feat of engineering took three years with local people of all colours working every day and in all weathers to ensure a timely completion. In case you think it unnecessary, I have included the ethnicity of the labourers because the poxy journalists of yesteryear fell over themselves in their lemming-like lust to portray South Africa as a land entirely steeped in oppression and racial discrimination. While there was sadly an element of truth pertaining to some areas of South Africa – it was by far and away not the whole truth.

Back at camp we uploaded the photographs and made the necessary write-ups before preparing for supper and bed.

At this juncture, I feel it prudent to pop a little helpful advice into the scribblings. Unless your medical insurance is up to date, I suggest you don’t answer the question, “Do you have a sleeping bag” like my foolhardy friend, who answered, “Sure, but I generally don’t wake her until 10am.” His doctor is confident he will regain full use of his legs in a few years.

No, that wasn’t the advice.
The advice comes more in the shape of a Buyer’s Tip.
It is a sad fact that many folks in the western world are overweight. Wouldn’t it be great if we all had the figure of Catherine Zeta-Jones or Tom Cruise [select the film star according to your gender preference]. But we don’t. Many of us cannot comprehend how we can be in so many places all at once; and this affects our choices in sleeping bag. But it is not only the flabby amongst us. Huge rugby players, wrestlers and muscled-up blokes (and blokettes) must have similar difficulties when buying sleeping bags.

If you are in the market for such an item, do yourself a favour and measure your circumference at the widest part of your shoulders, and your waist. Now, if you remember your applied mathematics – you will remember that the circumference of a circle is C=2πr and the (concise) circumference of an ellipse is C=4aE(e). For those of us mortals who feel an easier method is appropriate, simply take a length of string and wrap it loosely around the aforementioned areas, then measure the length of the string. Now add about 5cm or two inches. Why are we doing this?

By way of explanation; the primary function of a sleeping bag is to keep you warm. (It is also a refuge for snakes, scorpions and other creatures of which nightmares are made – but that is beyond the scope of this blog-post). It does this by using the properties of either hollow core fibre or down (gooses’ fevvers) to trap an insulating layer of air between the outer covers. If your body is pressed too tightly against the fabric, the warm air is squeezed out, greatly reducing the insulating effect of the sleeping bag – and giving you the appearance of an overstuffed pork banger with a face. So – your next sleeping bag should allow free movement of your body within the bag with your arms at your sides. At  your next visit to one of these stores, in a proud, happy voice ask the assistant for a sleeping bag with minimum shoulder width of [insert your dimensions here] and watch him squirm.

Most outdoor shops simply don’t carry stock of larger sized sleeping bags! I can’t provide any views on said stores outside of South Africa, but here in SA, the staff cunningly diverts your attention away from their inadequacy by hanging the sleeping bags slightly above head height so that the potential buyer is initially impressed at how long they are. The next thing we look for is the lowest temperature for which the bag is designed. In the couple of dozen Outdoor Warehouses, Sports Warehouses and other hiking/camping emporia I’ve visited in the past 12 months, many customers waddle out of the shop after only satisfying those two criteria. We felt we were more exacting by selecting hollow-core fibre over down because of the milder South African climate. However, we failed to check the size at the shoulders – and paid the price in the freezing tent.

I would like to call upon our plentiful supply of gigantic and fierce rugby players in South Africa to go into the abovementioned shops and ‘vigorously encourage’ the management to change their attitudes about stocking larger sleeping bags. 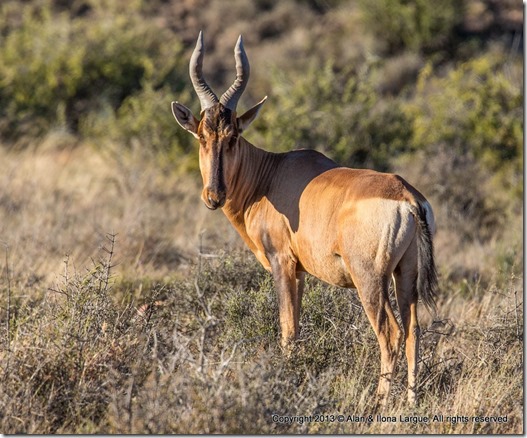 A shy looking Hartebees checking to see if you really read to the end.

Don’t look back – look forward – to the next episode. Stay Chooned.

Despite the banality of the name, FFC has led an intensely varied life. Grateful for surviving almost three years as a 'troepie' (soldier for non-South African Readers) in the Angolan war, he determined to wring as much out of life as possible. Currently providing Business Analysis services, trading on the stock market and developing web pages to pay the bills, FFC also dabbles in wildlife, landscape and people photography, writing, and far too many interests for his own good. He has also travelled extensively in southern Africa (working on the sound theory that a moving target is more dificult to hit). These peregrinations also include over 1500kms on foot through some of the worlds most spectacular scenery. It hasn't all been plain sailing, beer and skittles, and endless beds of roses... Chief amongst the prerequisites for surviving Africa, with its mind-bending characteristics, is an appropriate sense of humour.... So, for now, he will be recounting the amusing among the annoying, the frustrating wrapped in the funny and extracting the mirth from the melancholy... Oh yes, there might be some alliteration too.
View all posts by Freud Fission Chips →
This entry was posted in Humour - or humor, Namaqua Travels, Photography, Travel - Namaqualand, Wildlife photography and tagged Beaufort West, camping, Chestnut-vented Tit babbler, Fiscal Flycatcher, Gemsbok, humorous travelogue, Karoo, Karoo flowers, Karoo National Park, Kudu, Namaqualand, Namaqualand daisies, Namaqualand flowers, Old Master, Oryx, outdoor photography, Photography, Pirit Batis, South African Travel, tent, Toyota Hilux, travel photography, travel South Africa, travelogue, travels, wildlife photogrphaphy. Bookmark the permalink.