Ah, there you are. We’ll start today’s post with a Vulgar Latin phrase (it’s quite alright. It’s not the phrase that’s rude, merely ‘nonstandard’ Latin). Yes, ok. I’ll get on with it…

‘Necitas mater absentum est’ – which is Latin for FFC is rubbish at ancient languages. Well, he is but that’s beside the point. The reason for my absence was that another journey was undertaken – this time, to Johannesburg.

Years ago, the prospect of visiting Jo’burg (Joeys, Jozi or Egoli as it is also called) was invariably accompanied by a frisson of excited anticipation. Even before setting off on one’s journey, one would look forward to the large shopping malls with their captivating diversity of shops. In the city centre, sidewalks and streets bore the crowds of Johannesburgers (You want fries with that?), always going somewhere, always busy. Artistically designed window displays would lure patrons inside to sample items not found in smaller towns, while restaurants seduced the palate with the prospect of scrumptious, and perhaps exotic creations. All these shades of city life blended to paint a bright, vibrant image of pulsing life; a growing economy and a generally optimistic outlook.

Not so much today. Downtown Johannesburg is a dismal combination of garishly daubed attempts at inner city revival and deserted buildings. The Carlton Centre and Hotel, once the very hub of fashionable commerce – the place to see and be seen – is now a derelict reminder of the current government’s ineptitude. The famous, cylindrical Ponte Building is the haven of Nigerian and other drug cartels; where the trash lies five floors deep within the building; where police dare not enter. Hundreds of corporates (including the Johannesburg Stock Exchange) have abandoned their once prestigious presence in the centre of Johannesburg in favour of less lethal suburbs or cities. Hilbrow, that dynamic cosmopolitan melting pot which teemed with life 24 hours a day is now a place where visitors are advised by their embassies to avoid for their safety. It’s a place where you can find yourself being shot at if you’re in the wrong place at the wrong time. I speak from personal experience as a freelance photographer.

It’s not all crime and corruption though. For the most part, people still try to live out their lives in a peacable manner. There are still acceptable hideaways and if you keep your wits about you, it is entirely possible that you can spend time in Jo’burg, visit in peace, to do what you have to do, and that you will leave quite unscathed.

Be that as it may. From as far as 120km away, we could tell we were approaching Johannesburg. Talk about an atmosphere you can cut with a knife; the outlying industries were spewing enough air pollution to sully the sky from a brilliant blue to a dirty brown. Closer to the city, other refineries and mines made their toxic contributions and reducing visibility to a few filthy kilometres. The almost monochromatic grassland has never justified the dictionary’s definition of the Afrikaans adjective ‘vaal’ (faded, dull, drab, sallow, ashen) more than it does now.

As we crested the hill where the N1 splits into the N12/N17, the distant Johannesburg skyline, with the distinctive Ponte, Hillbrow and Brixton towers (now probably called something else by a government that will rather change names than innovate) appeared between the mine dumps and tried to reflect the afternoon’s sun. Feelings of anticipation gave way to caution, wariness and tension as we neared one of the world’s most violent cities.

Johannesburg skyline taken in 1988, from a mine dump that no longer exists.

Negotiating the city’s arterial complexities, the traffic became noticeably denser (the vehicles I mean; the density of the drivers remains, glaringly and controversially, somewhere around 75 on the IQ scale – roughly that of your average dog). We’d cunningly planned our arrival to coincide with the pre-rush hour lull and we pointed the car in the direction of a new discovery, Ruth Avenue Guesthouse in Dunvegan.

The front of the Ruth Avenue Guest House 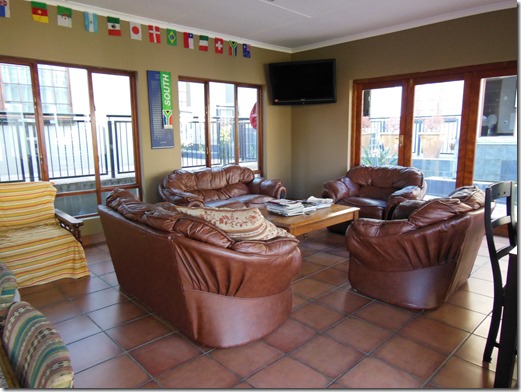 One of the lounges.

Owned by an ex-IT professional called Glen, Ruth Avenue Guesthouse is one of those serendipitous discoveries that make one want to keep it a secret in case the place becomes too popular. Glen and his wife have turned his new hospitality business into a resounding success. A determination to deliver excellence is evident in everything they do.

I have to confess I had been feeling pretty ropey for the entire trip, having contracted an interesting variant of the pneumonia variety. However, the comfort of the room, the simple and clean décor of the common areas and the cheerful and polite treatment by everyone from the owner to the housekeeping staff made the misery of the ‘pneumatic’ symptoms a lot more bearable.

In fact, so courageous was I feeling that I suggested to Mrs Chips that we venture out for supper to an East Rand shopping mall called Greenstone (http://www.greenstoneshoppingcentre.co.za/). Now if you’re a South African resident you’ll probably know the place, but for my foreign readers it’s a sizeable complex, serving residents mainly of the eastern suburbs of Johannesburg.

We were living in the Johannesburg area when this mall was built. At that time, businesses flocked to occupy some trading area and for a year or two, the mall hummed to the happy tune of ringing cash registers.

This time, the car park was about 10 percent full (sounds a bit better than 90% empty). We arrived there before 6pm with the expectation of meandering around a few shops until the pangs of peckishness pulled us into an agreeable eatery. By ten to six, shops were closing and the place looked as if there’d been a bomb scare.

A few of the chain steakhouses were open – predictably – but neither of us were sufficiently desperate to resort to a Spur meal, so we tried a place called Cappuccino’s. Bad decision.

Despite the banality of the name, FFC has led an intensely varied life. Grateful for surviving almost three years as a 'troepie' (soldier for non-South African Readers) in the Angolan war, he determined to wring as much out of life as possible. Currently providing Business Analysis services, trading on the stock market and developing web pages to pay the bills, FFC also dabbles in wildlife, landscape and people photography, writing, and far too many interests for his own good. He has also travelled extensively in southern Africa (working on the sound theory that a moving target is more dificult to hit). These peregrinations also include over 1500kms on foot through some of the worlds most spectacular scenery. It hasn't all been plain sailing, beer and skittles, and endless beds of roses... Chief amongst the prerequisites for surviving Africa, with its mind-bending characteristics, is an appropriate sense of humour.... So, for now, he will be recounting the amusing among the annoying, the frustrating wrapped in the funny and extracting the mirth from the melancholy... Oh yes, there might be some alliteration too.
View all posts by Freud Fission Chips →
This entry was posted in Photography, Travel - South Africa and tagged Hillbrow, Johannesburg, Ponte, Ruth Avenue Guest House, travel South Africa. Bookmark the permalink.