Almost midnight. The wind moaned eerily between the clefts in the brittle-cold rock. As each gust abated, the ice on the frozen stream in the ravine tinkled and creaked as if a ghost walked thereon. As the waning moon glared over the top of the mountain peaks, the long grass on the desolate western slopes bowed in waves as blast after relentless blast tore across the mountain.

Here there were no trees, no cover from the merciless elements. Here the cold and the wind penetrated your very soul. Here, four bodies tried to press themselves closer to the bitter mountain side. Four pairs of eyes peered keenly between the blades of grass as they lay, patiently, expectantly, coldly, for their prey.

After what seemed like an eternity, a faint noise could be heard between the gusts. Each man tried to suppress the shivering and ready himself for what was about to come. From deep within the ravine emerged strange spectral forms, almost shapeless in the moonlight. As they approached, they became identifiable – cattle and men.

One of the four raised himself and shouted. A rifle barked, he toppled forward; three other rifles spoke death to the cattle rustler who dared challenge the law. The rest scattered into the night, surviving to steal another day…. 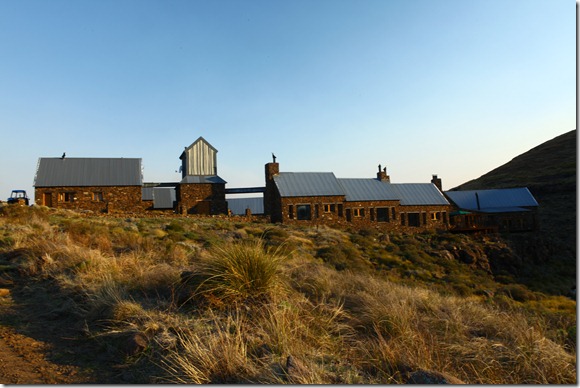 As introductions to one’s honeymoon travels go, I’ll admit this one is a tad unconventional, but it’s pretty neat in that it broadly describes a scene that might well have taken place in and around Naude’s Nek Pass – the one we ascended to get to our next honeymoon destination.

Just a few kilometres after Rhodes, one ascends this most scenic Pass. Stefan and Gabriel Naude, after whom the pass was named (and to whom a memorial was erected at the base of the pass), blazed the trail on horseback circa 1896. The road was later located again by an engineer called George Mandy and the pass was completed in 1911. This was done to facilitate the pursuit of stock thieves and other criminal elements who were active in the area; as well as the movement of military personnel around the southern border of Lesotho (or as it was known by its maiden name, Basutoland). At approximately 2500 metres above sea level, this is the highest public pass in South Africa and is one of the eight in the Eight Passes Challengein the Eastern Cape.

At this time of the year, the passes are not generally very challenging. However, travellers are warned to exercise extreme caution when travelling on them in winter when there is snow and mud. Even those with 4×4 vehicles, low range and diff lock, WITHchains have had to be extracted by tractor. Don’t say you haven’t been warned.

Now Tenahead might sound like the entry fee to a questionable establishment, but it is actually the name of a five star (yes, I that’s five stars) mountain retreat. Despite the fact that the hotel is situated on treeless grass slopes, there is an abundance of wildlife and plenty to see and do. From hiking, bum boarding/sledding to fly fishing – it’s all there. I confess to being an unenthusiastic fly fisherman, preferring to spray the little pests in the window. There is even a spa (during the busier months of the year) where you can be pampered to your heart and skin’s content. 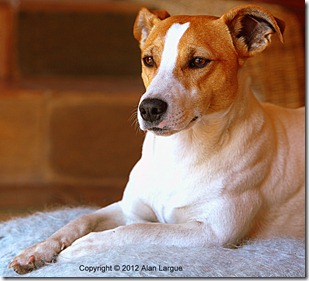 With only seven rooms, you’re unlikely to be forgotten in the crowd. On the contrary, Nolan and Shauna – the managing couple – could not do enough to make our honeymoon stay extraordinarily enjoyable. When I mentioned in passing that we had brought our archery kit with us for our following destination, Nolan’s eyes lit up and suggested he make up a shooting butt for us; and do you know he would have, had it not been for the weather!!

Our two-night’s stay at Tenahead was the result of a most generous gift from your writer’s sister and her family. The dangerous thing about such gifts is how easy it is to become accustomed to the incredible luxury of personal attention, magnificent meals and superlative comfort. 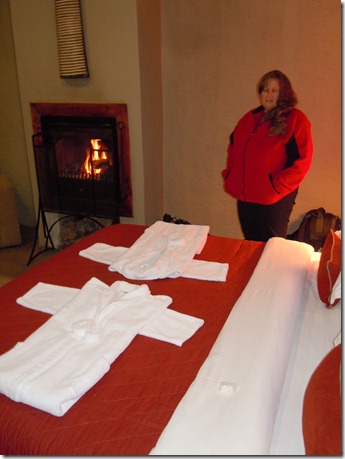 Our turn-down service. Bath robes laid out, electric blanket switched on, nougat or a chocolate on the pillow and a fire built in our very own fireplace, every evening.

We are of the firm belief that it is nigh on impossible to go hungry at Tenahead. With a gargantuan breakfast, morning tea, a high tea that would have a Puritan excommunicated and a scrumptious five-course supper, developing an appetite becomes a pure anticipatory pleasure.

A case in point happened on the second day of our stay, when we were the only guests in the hotel. That afternoon, Shauna found us and asked what we’d like for high tea. Something sweet or savoury she asked innocently. Expecting a couple of slices of toast and a few biscuits, I replied that a little of both would help nourish my poor emaciated 100kg (220 pounds or 92,233,720,368,547,760.00 Zimbabwe dollars – really!) frame.

Oh how wrong I was. While a nippy wind howled around outside, we basked in the warm afternoon sun as it streamed through the picture windows alternately reading, staring idly into space and nodding off. Shauna entered the lounge a while later bearing two large platters, containing a sumptuous selection of toasted venison sandwiches, small round cheese and Jalapeno creations, mini pavlovas (meringue with cream and strawberry slices) and fruit kebabs. I looked around to see if Napoleon’s army had just arrived but it really was just the two of us. Despite a heroic attempt to rise to the challenge, a truce was called – we simply couldn’t do justice to her outstanding effort. 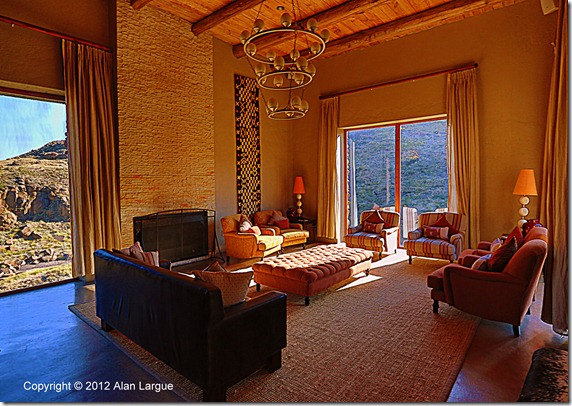 One of the lounges in which one can spend a lazy afternoon reading and consuming shameful quantities of scrummy tea-time treats. 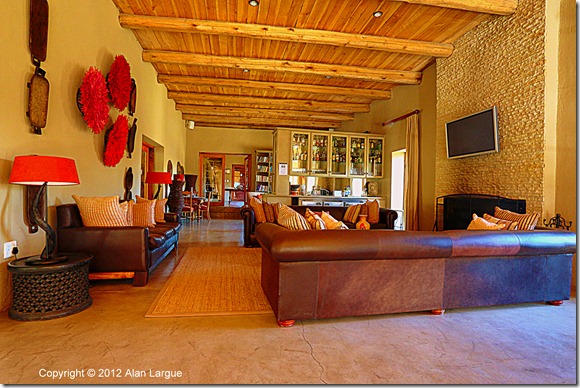 The TV lounge looking towards the reception area and well stocked library.

On our last afternoon, while Mrs Chips stole off for a nap, Nolan and yours truly went off to make some images, completing our self-imposed assignment after supper (see end of article). 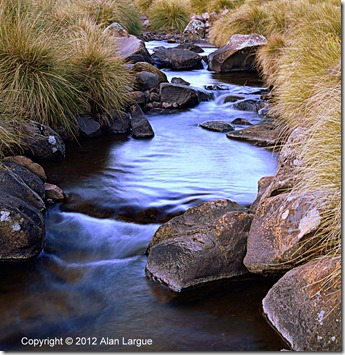 The stream running close by the hotel – on our photo-walk.

Later that evening when we retired to bed (that’s Mrs Chips and I, Nolan is married – and we’re rather traditional in that respect), we found a lovely surprise in the form of a bottle of chilled sparkling grape juice and two choccies on a tray in our bedroom – with a congratulatory card from Nolan and Shauna. Now this might happen in many first class hotels – but I dare say they don’t have the personal touch of which the Tenahead team can be justifiably proud. 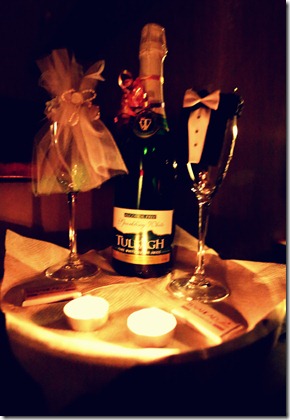 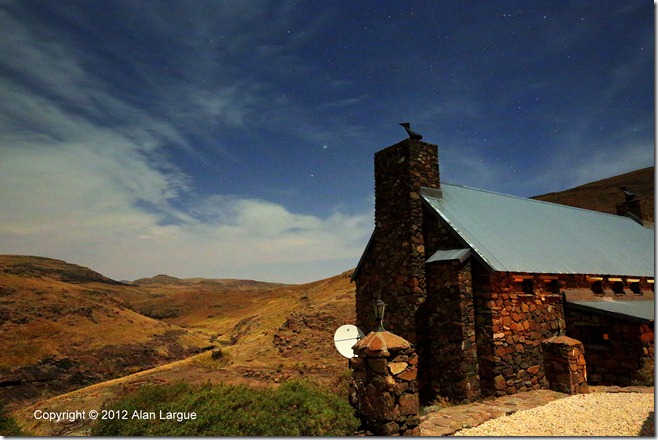 Tenahead at night – taken at approximately 9:00pm under an almost full moon. At 25 000ISO, a unique image is produced with the stars shining while the lanscape picks up the light of the moon.

Pop back soon for the next chapter in our Honeymoon Travels.

Despite the banality of the name, FFC has led an intensely varied life. Grateful for surviving almost three years as a 'troepie' (soldier for non-South African Readers) in the Angolan war, he determined to wring as much out of life as possible. Currently providing Business Analysis services, trading on the stock market and developing web pages to pay the bills, FFC also dabbles in wildlife, landscape and people photography, writing, and far too many interests for his own good. He has also travelled extensively in southern Africa (working on the sound theory that a moving target is more dificult to hit). These peregrinations also include over 1500kms on foot through some of the worlds most spectacular scenery. It hasn't all been plain sailing, beer and skittles, and endless beds of roses... Chief amongst the prerequisites for surviving Africa, with its mind-bending characteristics, is an appropriate sense of humour.... So, for now, he will be recounting the amusing among the annoying, the frustrating wrapped in the funny and extracting the mirth from the melancholy... Oh yes, there might be some alliteration too.
View all posts by Freud Fission Chips →
This entry was posted in Eating Out, Honeymoon Travels, Humour - or humor, Photography, Travel - South Africa. Bookmark the permalink.